Medical Humor: Santa Not The Picture Of Health

As with most journalism, for the moment, we’re all gonna have to say “Screw HIPAA”… GiggleMed.com has come across some disturbing medical records from one of the world’s most well-known personalities: 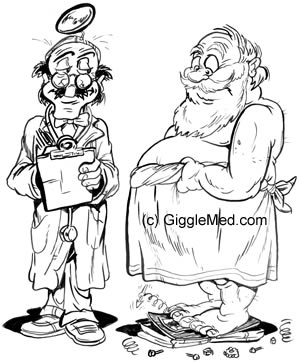 Let’s take a look to see some of the highlights (er, lowlights) from this man’s medical profile.

Obesity: January 3rd, 2001, Kris Kringle (his alias, I suppose) went to see his PCP, Dr. Klump, and is told he needs to lose at least fifty pounds to be within a safe weight range.

Diabetes: December 20th, 2004, Dr. Klump runs some tests and determines that Kris has very high blood sugar levels. The doctor urges him to be good this holiday season, and not indulge on snacks loaded with carbohydrates. On December 26th, 2004, Kris was admitted to the hospital after a night of cookie eating, complaining of dizziness.

Sleep Apnea: Mrs. Kringle calls Dr. Klump on March 15th, 2005 and asks what can be done about her husband’s snoring, as it worsens in his ‘off-season’. She noticed that during the snoring episodes, Kris stops breathing for a bit, and then resumes. She also reports him frequently “falling asleep at the reins”. The doctor advises that Mr. Kringle needs to lose wait, as he was instructed last year.

COPD/Emphysema: December 26th, 2005, Kris Kringle complains of coughing up excessive sputum. Dr. Klump vehemently suggests that climbing into chimneys and unnecessarily inhaling chimney soot is probably not the best thing for him to do. Kris also confesses to smoking a pipe almost every day for about ten years. Dr. Klump encourages smoking cessation and to consider home O2, but Mr. Kringle refuses, saying that the cord would slow him down. “Ho, ho… You don’t have a tube long enough, Doc.” 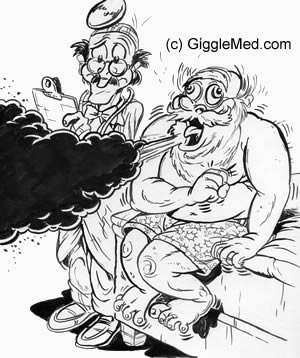 Chronic Back Pain: Kris returns to the office six days later because he has been experiencing sharp back pains for the past several months. He states they’ve become worse in the past few days. Dr. Klump reminds Mr. Kringle again that excessive weight is one of the main contributors to his chronic back problems. Weight loss is recommended for the third time, and he suggests using a lifting belt for heavy items, or receiving help from his ‘little assistants at the office’.

DVT: On December 27th, 2006, Mr. Kringle shows Dr. Klump extensive redness on his legs and calf tenderness. Upon examination, the doctor suggests that Kris spread his travel out over a period of a few weeks. Also, he questions why Mr. Kringle refuses to get a roomier sleigh.

Sacral Decub: Mr. Kringle is driven to Dr. Klump’s office by his wife on July 15th, 2007. He refuses to sit in the waiting room, opting instead to stand. Mrs. Kringle informs Dr. Klump that Kris has not left the bed very much since January, and he spends much of his days watching his It’s A Wonderful Life special edition DVD. He has a stage two bed sore. Dr. Klump sends Mrs. Kringle home with Desitin and DuoDerm patches, and reminds Mrs. Kringle that he grows tired of recommending physical activity to Kris.

Urinary Retention: Dr. Klump performs a checkup on Kris on June 20th, 2008, and needs a urine sample to check on Mr. Kringle’s diabetes. Mr. Kringle stated that he could not urinate because it hadn’t been a full twenty-four hours yet. Apparently, he had trained his bladder to hold a full days’ worth of urine. Dr. Klump advised that Mr. Kringle needed to void every few hours to prevent serious kidney problems and bladder infection. “Can’t you just give me one of them catheter tubes?”

Alcoholism: Dr. Klump had asked Kris to return the next day to provide the urine sample and some blood tests, and he obliged. Dr. Klump noted the high ethanol levels in the blood. He rationalized that those sweet rosy cheeks were not just a result of blushing or cold weather. He called Mr. Kringle to urge him to lay off the booze, especially this holiday season.

A Host of Psychopathologies: Though up to this point Dr. Klump had entertained most of Mr. Kringle’s delusions, he became quite concerned when Mrs. Kringle called in early December of 2008. Apparently, Kris had been roaming around the house, mumbling something about a red lightbulb. He was later discovered in the forest preserve, fitting a buck with man-made antlers.

Mrs. Kringle later confessed that Kris had spent some time in an institution, but for insurance purposes, used a different name. Upon further investigation, Dr. Klump uncovered a long profile for a patient named Babbo Natale, a.k.a. Kris Kringle.

Apparently, “Babbo” had been arrested for breaking into homes, and leaving gifts around the home, both wanted and unwanted. The charges were later dropped since nothing had been taken, save for a few cookies and carrots, but admission to a facility was recommended. While undergoing treatment, Babbo/Kris became nervous around October because nothing was getting done, as he kept repeating to himself. In his room, sketches of toys were found all over. Babbo was released the following year but not without leaving his mark. Staff reported that from February until September, he would sit in his room and cry, and in November, he became violent, yelling for someone to notify the elves that they were on their own this year.

Sources reveal that, today, upon glancing at his calendar, Dr. Klump shuddered as he saw the date December 22nd staring back at him. He packed up his house and his office, and moved far, far away.

GET HILARIOUS CHART BLOOPERS IN YOUR INBOX

Get hilarious medical chart bloopers in your inbox. Every two weeks or so, you'll get a big belly laugh :) Sign up below and verify your email. After that, we are not responsible for any incontinence.